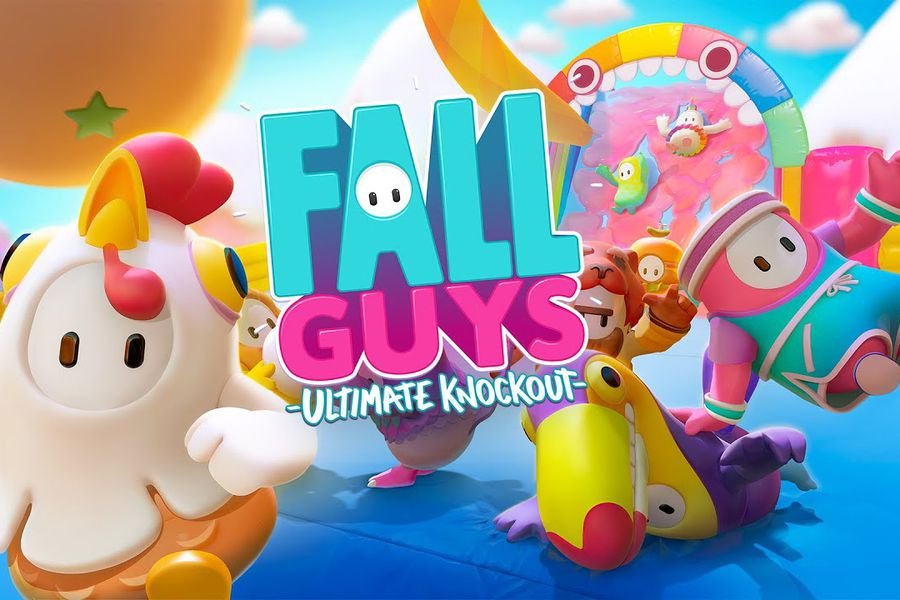 Fall Guys is, at its core, a cute and often frantic 60 player king-of-the-hill styled race and survival game that takes elements of both the party game and the battle royale framework to produce something genuinely fresh and new. On its surface, Fall Guys is adorable and silly, but that doesn’t mean that its an easy game or something to take lightly. Made up of several minigames that you compete in to be among the minimum number to qualify (from the starting 60 to 40 to then drastically low numbers in the under 20s), you can start off being silly and dastardly evil towards opposing bean people things, but when you get to one of the games many final rounds, the kid gloves come off, the concentration level goes sky high and the desire to win is extreme. Fall Guys eventually becomes a game where the most seasoned of gamer will be tested on how their skillset is. Are you a Mario 64 wizard and can run, jump and climb like the best of them? Fall Guys will put even those skills to the ultimate test. I’ve been gaming for nearly 35 years now and the test of skill in Fall Guys is masterfully well done. I’ve found myself channeling some old school twitchy thumb style of play in my quest to win the 25 plus crowns I’ve won in my time with the game, and it delights me to see some players with nearly 500 wins doing their thing in the streaming communities that have popped up due to this game’s existence. 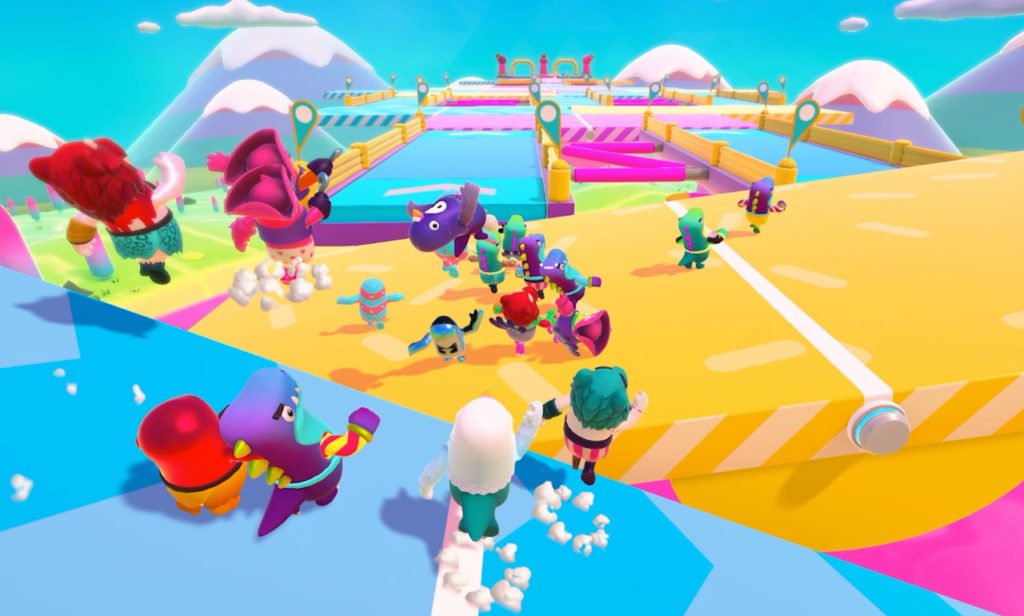 There are many different types of levels within Fall Guys: You’ll often find yourself mostly participating in footraces that contain various obstacles; spinning fan blades, slime coated ramps, tilting see saws are among many of the various objects to overcome in these races. Some will even have giant pieces of fruit shot out of a cannon that come tumbling toward you while you race up a conveyor belt not only to dodge them but also the other players who may have had the unfortunate luck of meeting head on with a watermelon. The game wisely breaks up these races with some more endurance style competitions as well. A mode called Block Party, for example, forces you to battle others for space as a series of walls come in with gaps small enough for you to fit through and floorboards to jump over. Other levels split the group into teams, forcing you to work together not only to win but to sabotage the other teams and eliminate a good chunk of players from the competition. It all leads to laugh out loud fun, and sometimes a sense of frustration if your team isn’t up to the task of knowing when to sabotage and when to play the mode outright. It leads to the game’s only downside in that you can be having a perfect run only to lose because your teammates couldn’t get it together when it counted.

As of this review, we’re well into Fall Guys first season in its free pass (Yes! FREE!) and Season 2 is almost upon us. The season has seen us earn kudos and fame as in-game currencies to be spent on various colors, patterns and costumes. Seeing a bean thing in a hot dog costume or in a giant chicken suit is often hilarious. I have a great fondness for the various video game tie-ins due to the game’s relationships with Valve and publisher Devolver Digital. Seeing someone run against me as the Team Fortress Scout while I’m rocking a suit from Enter the Gungeon is something reminiscent of a feeling found in games like Smash Bros, and seeing characters like Gris and Gato Roboto as costumes has made me slightly jealous that I’ve spent my crowns on a Master Ninja outfit and several legendary color schematics instead. I’m definitely going for that super hero outfit if its still around as a drop in Season 2, but with that new season being medieval themed, I may have to settle for a pretty princess or wizard look instead.

My biggest concern initially was that the game would feel stale after a few weeks since none of the game’s maps changed up or had any type of differences as you progressed through the rounds. Thankfully partway through Season One, developers Mediatonic added a randomizer element in an update that changed up the placement of certain obstacles in the races. Some players such as I had developed masterful strategies in the races so this was a welcome change to a game that people were eventually figuring out as time went on over the weeks since its launch. Some of the modes feel out of place and sometimes lend itself to a minor amount of tedium. Perfect Match for example tasks you to match pictures in a memory game and it results in little-to-no eliminations. I understand why its in there, as many of the other modes can test your anxiety levels so it is nice to have a moment to breathe. The grab mechanic still needs some work as sometimes in modes like Tail Tag or in some of the races, I’ll find myself grabbed by a player that is nowhere near me. I’ve already made my complaint about the team games earlier, however, so I am very aware that that is the nature and risk when playing a game online. 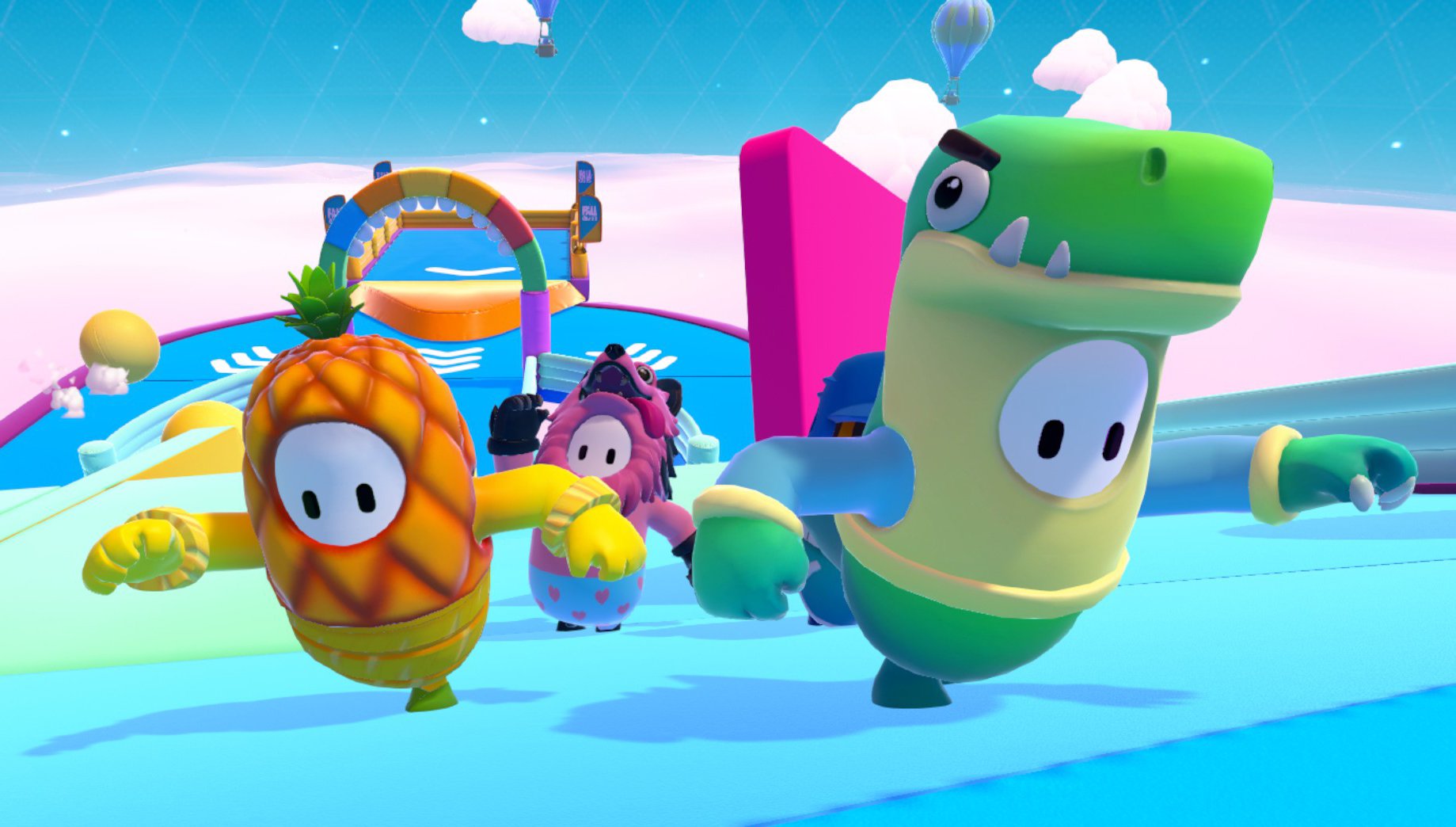 All those frustrations are tossed aside very quickly once in that final round and the crown is within reach. Doubly so when that crown is achieved, and the musical score hits alongside your character’s win animation that you’ve set up and the video game equivalent of a sugary snack is injected straight into our eyeballs. Every Fall Mountain final race, every Jump Showdown climax, every Royal Fumble chase and every frantic fight in Hex-A-Gone have all been worth it when you nab that ever so elusive victory and that is a clear sign that Mediatonic knocked it out the park with Fall Guys. I’m looking forward to Season Two and hoping for more quality of life changes (Create-A-Map mode when?) as the game progresses.

Fall Guys is extremely innovative and unique when compared to other battle royale games (and that’s if we can even consider it a battle royale game) of its ilk. It feels more at home alongside games like Tetris 99 and Mario 35 than it does PUBG or Fortnite, but with an excellent non-violent design and a healthy gameplay loop it is a promising and addictive game for players looking to play this long term. It’s always amazing when a video game is not afraid to just be a video game. What I find funny is that Fall Guys does so much right it makes it the battle royale game for people who don’t like battle royale games and that’s an amazing feat in and of itself. It’s an excellent game that puts a smile on your face round in and round out and given the present circumstances of the year 2020, we could all use a little more happiness…and more like Fall Guys. 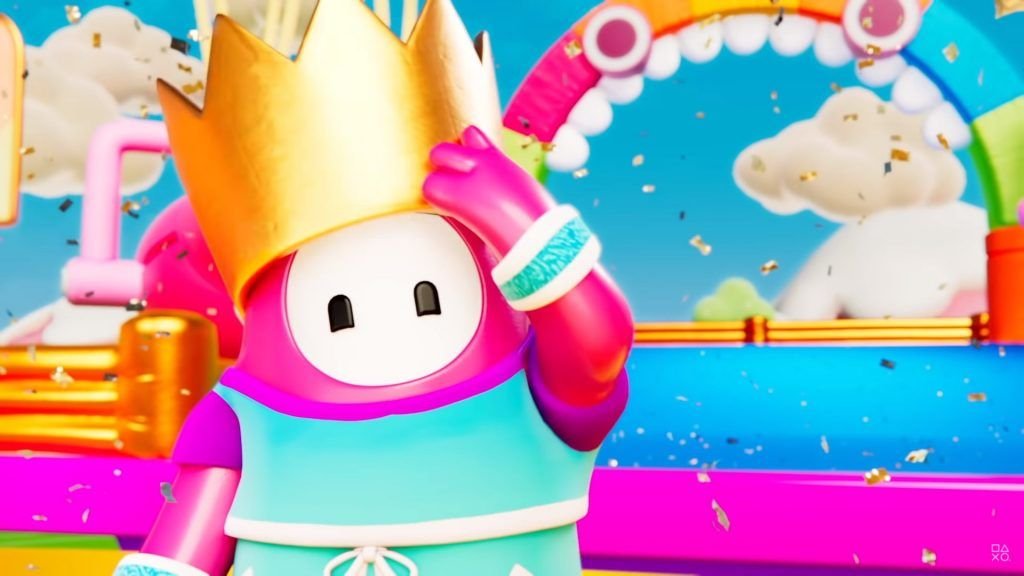 Rebooting a franchise is never an easy ordeal. One of the positive metrics of a...

When the PlayStation 5 was first announced, one of the early games revealed for it...

I know what you’re thinking. You’re looking at that title and you’re saying to yourself,...

Nobody Saves the World comes to us from Drinkbox Studios, makers of the amazing Guacamelee...

It really is a great feeling when a video game you thought nothing about winds...

It goes without saying that the Metroid franchise is a staple series in my personal...

Occasionally a video game comes along that solidifies and cements our personal reasons on why...